On August 24th Ukraine is celebrating its 20th birthday!

Twenty years ago in 1991 a new independent democratic country appeared on the world map. We are excited to celebrate 20 years of Independence of Ukraine!!  We are a country with more than fifteen centuries of rich and colorful history. Many people are happy to say: “We are proud to be Ukrainians! We are proud to live in independent country. We are still young; we are still learning how to live in this demanding world. We understand that it’s a long way to go, a lot to improve, a lot to understand, and a lot to prove. But we are happy to be living this life on our own, with our mistakes and our achievements! We are Ukrainians!”

Coat of Arms of Ukraine 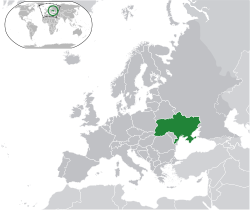 Ukraine on the map of Europe

It had been a long way to independence. After Soviet Union collapsed in 1991, leaders of central Communist party tried to restore control over the USSR, and take down Soviet president Mikhail Gorbachev. They attempted a coup, known as August Putsch or August Coup. It was on Monday, August 19, 1991, when senior Soviet officials set up a State Committee for State of Emergency. Together with KGB conspirators they placed Mikhail Gorbachev under house arrest. They sent more than 4,000 soldiers, including 362 tanks, 427 IFV (infantry fighting vehicle) and APC (armored personnel carrier), plus about 250,000 pairs of handcuffs to Moscow. Most of local newspapers were banned, and most of TV channels went off air in Moscow. Only Communist media, newspapers, TV, and radio could safely operate.

A few more democratic members of the Soviet parliament issued a declaration in which they stated that an anti-constitutional coup was organized. They urged the military not to participate in it. Because all the mass media was controlled by Communist Party, they had to spread the news by flyers and hand bills. People came to the Soviet White House (parliament building of Russia), and tried to withstand the military force. Some got killed, many were wounded. People wanted change. People were scared, but they knew change was coming. They were strong. On August 22, 1991 troops and tanks were eventually pulled out of Moscow.

Ironically, both Gorbachev and the coup conspirators wanted to save Soviet Union from break, though their attempt failed.  But by then, it was too late!  Events in Russian and  other fourteen Soviet Republics had begun to take on a life of their own.  The Soviet occupied Baltic Republics had struggled against Soviet and Russian oppression.  Estonia, Latvia, and Lithuania were the first to break away for the Soviet strangle hold.  Ukraine, soon followed!

For many centuries, foreign powers like the Russian Empire, Kingdom of Poland, Grand Duchy of Lithuania, Austro-Hungarian Empire, Turks, and Tatars, all occupied Ukraine from time to time. So, finally in 1991 Ukraine’s long journey to independence was coming to a happy end. People chose their first president of Ukraine (Leonid Kravchuk) on December 1, 1991.

Now about 45,778,500 people live in Ukraine. Ukraine is  the largest country in Europe! It shares borders with 7 neighbors: Belarus, Hungary, Moldova, Poland, Romania, Russia, and Slovakia. Of course this neighborhood influences demographics of Ukraine. Around 67% of population is Ukrainian, 30% Russian; the rest is Crimean Tatar, Bulgarian, Romanian, Hungarian, etc.

Ukrainians are proud of their Black and Azov Seas, beautiful Crimean and Carpathian Mountains that rise above wheat and sunflower golden fields, and rivers of Dnieper, Dniester, Southern Bug, Desna, and others that run through Ukrainian body, like life-giving veins.

But most of all, Ukrainians are proud of their long history, rich black soil, melodious language, beautiful women, and their enigmatic soul.

Check out National Anthem of Ukraine “Shche ne vmerla Ukraina” (Ukraine’s glory has not yet perished).

Proud to be Ukrainian

See how beautiful Ukraine is!!!!

I am proud to be Ukrainian!